As we are now in the second quarter of 2020 it is time to look back on the introduction of the IMO legislation on the regulation of sulphur emissions from bunker fuels. The dust has settled with respect to the implementation of these new rules. But as this happened a ‘black swan’ arrived on the global oil scene: COVID-19 or the Corona virus. This virus and the international crisis it evoked is gripping international trade and impacting shipping and bunker sales like nothing we’ve ever seen before. So, this article will also look forward to estimating the medium-term impact on bunker markets and in particular on bunker storage markets.

The International Maritime Organization (IMO) has implemented its global legislation to limit sulphur emissions as a result of marine fuels. The legislation calls for a reduction of the sulphur content in marine fuels to less than 0.5%, which has started January 1st, 2020. Until the start of 2020 the limit was 3.5%.

Leading up to the start of this new era in marine fuels there have been multiple opinions or scenarios about which bunker fuels would become dominant. In first instance, most stakeholders thought HSFO would remain the dominant bunker fuel because of the expected uptake of scrubbers. Other stakeholders assumed that MGO would become the dominant bunker fuel as there wouldn’t be enough supply of 0.5% FO. In 2018/2019 some oil majors, IEA and consultants changed their opinion believing that VLSFO would become the dominant fuel. There were other stakeholders, like the gasoil traders, who thought that the demand of MGO would increase significantly because of IMO 2020.

The first months of 2020 show that VLSFO seems to be the dominating bunker fuel. Consumption of MGO increased only slightly by around +10%. HFO is about 20% of total fuel oil consumption, with the rest being mostly VLSFO.

The introduction of the new 0.5%FO, called VLSFO, has led to some compatibility concerns. VLSFO blends can come from residual components and distillate components. Residual components are mostly aromatic due to the asphaltenes in the bottom of the barrel. Distillates are high on paraffins. Blending these two streams together can lead to compatibility issues. This can occur if a ship switches between different batches and the fuel is mixed in the ship’s fuel tank, a process also known as co-mingling. Co-mingling bunker fuels from different origins could lead to serious damage to engines or clogging of fuel lines. VLSFO residue blends, being more aromatic and hydrotreated vacuum gasoil (VGO), being less aromatic have these compatibility issues.

These compatibility issues also have a positive impact on the demand for storage capacity as some product owners avoid co-mingling new fuels in their tanks. So, this calls for segregated tanks, which will increase demand for tanks.

An important and lucrative business for oil traders in the ARA-region used to be the transhipment of fuel oil from Russia to the Far East. However, this transit flow has largely disappeared. On the one hand supply of Russian fuel oil has gone down whereas demand for fuel oil in Asia has dropped significantly. Furthermore, Asian bunker demand for fuel oil is currently be supplied from other sources more nearby. Nowadays, Russian export are directly exported in smaller tankers, with as main destination the US. ARA is not the place anymore where making bulk for HFO takes place.

Our assumption in the post 2020 era is that the shipping industry will keep on using FO as the dominant marine fuel (80%). Unclear is what the share of each VLSFO and HSFO will be.

In our forecasting models the Corona effect is incorporated. Assumption is that the current lockdown lasts three months and has a negative impact on marine fuel bunker consumption levels. After the lockdown, consumption level will gradually normalise, which will take five years. Our assumption of five years is based on experience in the past and the enormous fall of GDP which influences the consumption of fuel oil. IMF forecasts a contraction of the global GDP of 3% in 2020, while the Eurozone will see a decline of 7.5% in 2020. It will take several years of GDP growth to be back at the same GDP level as in 2019. The consumption of bunker fuel is heavily correlated with global trade, so we expect it will take several years before bunker fuel market is at the same level as in 2019.

Due to growing bunker fuel consumption and declining average production, surplus in NW Europe will change into a deficit. Terminals in ARA specialized in fuel oil will benefit from the growing size of the fuel oil bunker market. As the number of grades has increased and more components are needed to blend into the 0.5% FO / HSFO / MGO, more storage capacity is needed.

Additionally, on top of these structural effects on fuel oil supply, demand and imbalances, there is an enormous oversupply in the market due to the COVID-19 / Corona crisis. This has resulted in a steep contango in fuel oil forward prices and is stimulating traders to buy and store excess fuel oil supply. This provides major support for fuel oil storage rates in the short to medium term. 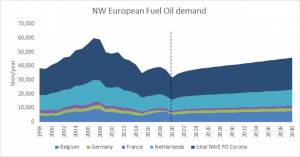 The real impact of Corona on the global and regional GDP’s is not clear yet, but we may conclude that the IMO 2020 regulation have had a positive impact on the ARA tank storage demand. Also in the short to medium term, the COVID-19 / Corona crisis have had a positive effect on the tank terminal business.

What lies in store?

Tank terminals are filling up with oil: who is profiting and how long until tanks are full?